We observed a pretty interesting phenomenon at the weather center yesterday afternoon. I noticed that the dew points locally had crashed into the single digits as our frontal system was beginning to approach from the west. We knew going into yesterday that it was quite dry in the lowest levels of the atmosphere, but I noticed a sharp drop in the dew point just before 6:00 PM on our weather station. It dropped nearly 10ºF in about a half hour, which is very common when a cold front is moving through – but what seemed like an otherwise pretty ordinary day this was a notable observation. 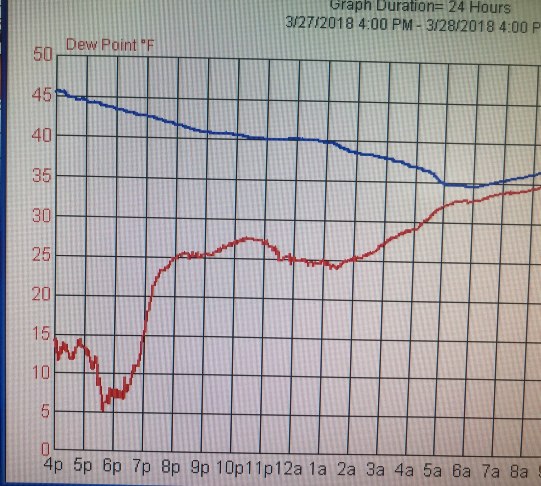 Obviously, when you see something that significant you often want to check to see what surrounding stations are reporting – So I pulled the Danbury Airport Observations (western side of town)… and the drop was just as dramatic – occurring right around 5:00 PM

and the same for Oxford Airport. They are a little east so they reached their driest dew point just before 7:00 PM.

Note that while this was going on the temperature (in blue) was steadily falling, but not at a particularly rapid rate, and the winds were light, and remained consistently out of the south. So it’s clear the answer to the question really had to do with what was going on above the surface.

It turns out some of our high resolution guidance actually had this drop modeled quite well. This is taken from the 18Z 3 KM NAM run yesterday:

This is a diagram of temperature (red) and dew point (green) in western Connecticut from yesterday after as forecast in this model run. (where the lines are really far apart -that represents a DRY airmass, where the lines are close together it means the airmass has just about all the moisture it can hold!)

The chart reveals that there was a corridor of localized subsidence or “sinking air” that was causing the dew points in this near surface layer to briefly crash. This was coincident with some gusty southwest winds that picked up just above the dry layer. They were transporting a decent amount of moisture in, but it was arid near the ground around here during the dinner hour yesterday! **Update** The current thinking is that this was likely some sort of gravity wave along the moist/dry boundary layer. 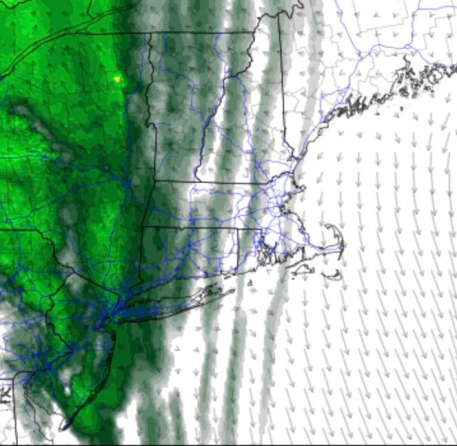 The gray shades indicate the sinking air in response to the wave moving through above the boundary layer (indicated by the pink frontogenesis contours).

This dry air pocket did erode away as precipitation began to move into our area last night, but as you may imagine – the little rain that tried to move in struggled to reach the ground. Overnight rainfall was less that 0.01″ – what we meteorologists commonly report as “trace”!