Weakening low pressure moves by the region today. As it does so a ridge of high pressure will build down from Canada before eventually cresting over eastern New England later this week.

As the ridge gradually departs to the northeast this weekend, all eyes will turn towards the eventual progression of powerful hurricane Matthew. It is expected to emerge from the Caribbean into the Bahamas on Wednesday before tracking just offshore of the Carolinas this weekend. A trough and associated frontal system will approach next weekend increasing clouds and bringing some scattered showers.

The manner in which Hurricane Matthew interacts with those features will have big ramifications in the weather we end up seeing especially during the Sunday through Tuesday time period next week.

A DIRECT IMPACT IS NOT LIKELY AT THIS TIME.

Even with a track well offshore the upper low and associated frontal system could help draw in tropical moisture from Matthew and deliver significant rainfall for a period of time Sunday. Now is the time to review your preliminary action plan and monitor later forecasts. 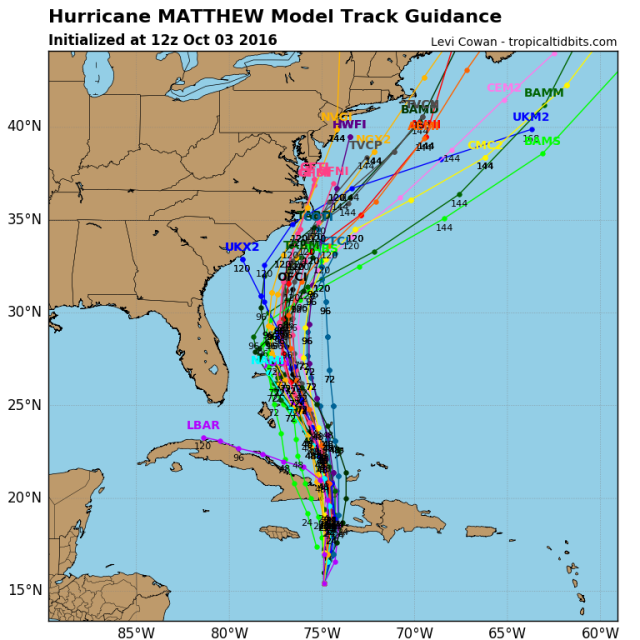 There are big discrepancies between the major global models right now surrounding a couple of key patterns:

The Euro still has a better apparent handle on the overall pattern, which suggests a more offshore track at least for New England. This is a fairly long range forecast though, so it’s important not to write this off just yet.

26 year old blogger. Idealistic, hardworking, and optimistic. Bachelor's Degree and soon to have a masters degree.
View all posts by Ryan G →
This entry was posted in Forecasts. Bookmark the permalink.