Cold Week Ahead, what about snow chances?

Discussion: A deep 500mb trough is in control over the Eastern third of the continental US. Further west, there’s some ridging over the pacific coast and another trough axis over the gulf of Alaska. At the surface, the area of low pressure responsible for our accumulating snow last night is well east of Cape Cod. High pressure to our west is gaining influence. A brisk northwesterly flow continues to usher in bitterly cold air from an area situated over Canada. Clear Skies, frigid temps, and incredibly dry air will be the story for the next 48 hours. An area of low pressure is forecast to pass to our south on Friday afternoon, it’s track and eventual evolution remain uncertain but this could bring another round of accumulating snow to the region.

Forecast: We will see the coldest temperatures across Connecticut and Long Island since the 2010/11 winter both Tuesday and Wednesday Night this week as the core of the arctic blast is here (near 0 in Connecticut, single digits and teens in Long Island). Clear and cold conditions will prevail during the day with temperatures in the teens-lower 20’s in Connecticut for highs, lower-mid 20’s for Long Island through Thursday. The forecast diverges on Friday as low pressure passes out to sea to our south. Does is come close enough to give us accumulating snow?

Below is an image from the 12z GFS, 72 hour forecast. We are looking at 500mb height anomalies for 12 Friday. 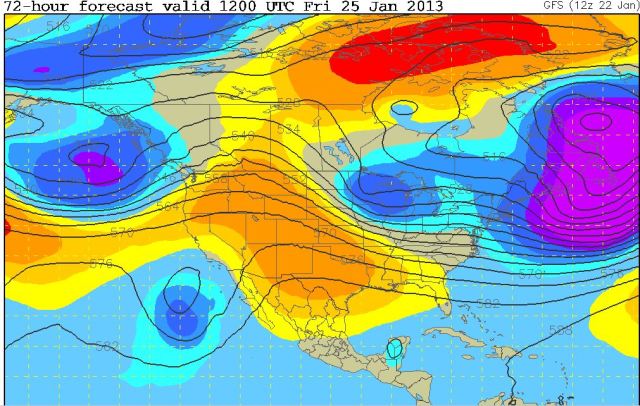 Notice that huge area of darker coloring in between Southern Greenland and the Canadian maritimes. Normally when we are looking for a pattern to favor east coast development we would like to see more positive anomalies. Let’s look at the NAO teleconnection itself:

Neutral to even slightly positive. Having said that I think we are more likely to see a weaker area of low pressure further south. This doesn’t mean accumulating snow is ruled out, but it does mean the confidence for a major snowstorm on Friday is very low. I’ll have some more detailed updates tomorrow, as more data comes in over the next 12-18 hours, with some of my own graphics. Have a great night!

26 year old blogger. Idealistic, hardworking, and optimistic. Bachelor's Degree and soon to have a masters degree.
View all posts by Ryan G →
This entry was posted in Uncategorized. Bookmark the permalink.