Threat: Potential for Snowfall Greater than 6″  From The Mid-Atlantic To New England

Time Frame of interest: Sunday Night into Monday – with the heaviest Precipitation at night

Discussion: A closed upper level low develops in the Midwest early this weekend that moves east southeastward into the Ohio valley late Saturday while a surface low develops out of a frontal wave originating near the gulf coast. As you can see the interest lies in this fairly large area of disturbed weather evolving during the day tomorrow 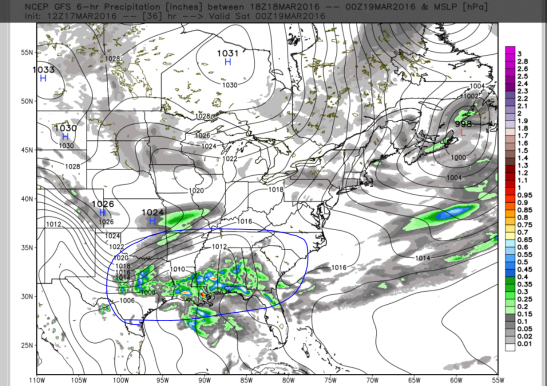 This feature will track northeastward off the mid-atlantic coast. There’s some decent spread in the eventual track and strength of the storm as it passes offshore of New England.

If we take a glance at the GEFS ensembles, they hone in on a potentially significant snowstorm for southern new England.  These Images all courtesy of weatherbell analytics and Dr. Ryan Maue. The first image: where the ensemble mean puts the closest approach of the surface low. The second shows the upper air pattern at 500mb, and the position of the anomalously cold air fueling the snow threat (lower 500mb heights= colder air). The third image shows the probability of snowfall exceeding 6″

The GFS operational is weaker and further east of its ensemble. The recently upgraded ECMWF model; however, has a more amplified storm system closer to the coast. Over the next couple days, we’ll be able to hone in more specifically on where the greatest snowfall threat lies, the magnitude of that threat, and how much rain becomes a factor if the projected storm track shifts west.